Gender reveal parties are a relatively new concept, yet they have quickly gained traction as a fun way for expecting parents to announce their baby’s gender. Celebrations include a surprise gender reveal to the attendees, often followed by themed treats and games.

Even so, because these parties are new, many people are unaware of the gender reveal party etiquette. Using this guide, you can quickly learn the best practices for your upcoming party! Who hosts a gender reveal party?

Gender reveal parties are typically hosted by the couple who is expecting. Though the occasion is important, the actual celebration is akin to a backyard barbeque when it comes to a gender reveal party, and should be treated as casually.

Even if the couple chooses to hand off the actual reveal to a friend or family member, they should still be the ones to actually host the event.

Who should be invited to a gender reveal party?

Most gender reveal parties are limited to family and close friends, though it really depends on the couple and what they wish to celebrate. Because baby showers are usually reserved for the mother’s and her girl friends, this celebration is a good time to include more male friends.

However, if some people can’t make the event or aren’t included, there is still always a baby shower later on in which coworkers, friends and other acquaintances can be invited. When is a gender reveal party typically held?

However, if the parents decide to throw the party later on, they can easily have a joint baby shower and gender reveal party to avoid overwhelming friends and family with too many parties.

What are creative ways to reveal the gender?

I’d include a couple sentences of text here + a bulleted list of some creative ideas. You can also link out to an outside resource with more ideas.

Since the reveal of baby’s gender is the main attraction of the party, couples will choose to get creative with the actual reveal. Here are a few different fun ways to reveal the gender: For even more ideas, check out this roundup post from Inspiring Pretty.

Can the parents be surprised at a gender reveal party too?

Many parents choose to be surprised at their gender reveal parties and this is not only completely acceptable, but an easy way to build excitement for everyone. There is no right or wrong choice here. It is completely based on preference! However, it is usually best if both parents are completely content with either gender, to avoid the awkwardness of disappointment.

Additionally, should the couple want the experience to be a surprise for everyone, they may elect for their friend or close family member to organize the gender reveal. However, if the couple is interested in seeing other’s reactions and surprising their friends, they may instead choose to know ahead of time.

No matter the choice, both make for a fun gender reveal party! What does a gender reveal party entail?

A gender reveal party consists of a few games, themed food and drinks and of course, the reveal of the baby’s gender!

Though games are required, they contribute to the fun, celebratory atmosphere of the party. Games can range from typical outdoor activities to the more zany types like diaper changing competitions. For more casual activities, some couples will only have a betting game in place to guess what the gender of the baby may be.

Food and drinks can vary, though hot dogs are a common, easy option. The desserts are often pink or blue cupcakes or frosted cookies, keeping to the gender reveal theme.

To build anticipation, couples will wait until about midway through the party, usually before dessert, to reveal the gender of their baby. Afterwards, everyone can celebrate further with desserts and more fun activities.

Should you bring gifts to a gender reveal party?

Gifts for a gender reveal party are by no means required, but they are always welcomed and appreciated. Getting ready for a new family member is an exciting time, and a gift is a small gesture that can contribute to that celebration! When in doubt, focus on the expectant mother, since you don’t yet know the gender of the baby.

Here are some gifts to bring even when you don’t know the gender of the baby ahead of time:

To help the mom-to-be with the coming months, a gift like a plush robe makes it easy for her to cozy up in the evenings or relax after a nice bath. It’s also a nice way to subtly reminder to give herself some “me” time more often! If there’s one thing commonly associated with pregnancy, it’s cravings. Gifting a basket of delicious chocolates is always a winning option. Make it easy on yourself and get a box filled with different chocolates, including salt covered ones to satisfy that sweet and salt craving.

Another great way to encourage the expectant mother to relax is with a spa basket. Or, if you know she has a favorite neighborhood spa she frequents, you can also get her a certificate there.

A nice necklace or ring is a thoughtful way to give the new mom a timeless piece to remember her experience by. If possible, look for something to remind her of her new family, though anything that might complement her style is sure to be appreciated! A mug is a small, easy gift that isn’t too over the top, making it great if you are less close to the couple. This mug even comes with a tea infuser and your choice of tea so she doesn’t even have to leave the house!

A new baby is always an exciting time for any couple, but also for their friends and families. When invited to a friend’s gender reveal party, you get the pleasure of joining in the couple’s celebration. Though a gift isn’t required, if you want to treat the parents to something special, consider gifts for expecting mothers! 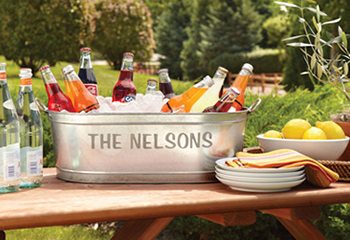 Updated April 1, 2020   While we are pleased that Gifts.com remains open for business, we will be extending our suspension of operations at our…

Updated April 1, 2020   While we are pleased that Gifts.com remains open for business, we will be extending our suspension of operations at our…